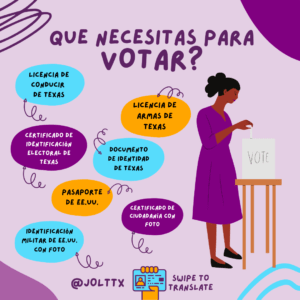 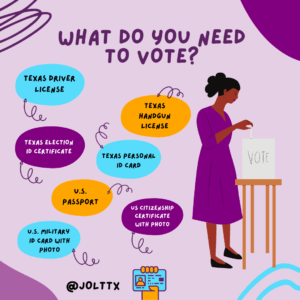 With the exception of the U.S. Citizenship Certificate, which does not expire, for voters aged 18-69, the acceptable form of photo identification may be expired no more than four years before being presented for voter qualification at the polling place. For voters aged 70 or older, the acceptable form of photo identification may be expired for any length of time if the identification is otherwise valid. If you do not have a valid ID, you may sign a Reasonable Impediment Declaration and provide a copy or original of any of the following documents: a government document that shows the voter’s name and an address, including the voter’s voter registration certificate; current utility bill; bank statement; government check; paycheck; or (a) a certified domestic (from a U.S. state or territory) birth certificate or (b) a document confirming birth admissible in a court of law which establishes the voter’s identity (which may include a foreign birth document).

When & Where to Vote
Report Voter Intimidation
Am I registered to vote?
Get a ride to the polls!